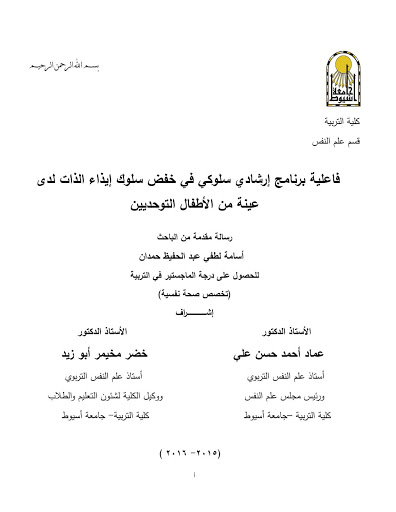 Aim of the study – The current study aimed at knowing to identify the historical development of the disorder autism and the theories, which explain it. Then we design and prepare a heuristic behavioral program based on behavioral therapy to reduce the behavior of self-injury among a sample of children with autism. We can do that through the use and the recruitment of some techniques behavioral therapy and making sure of (checking) the effectiveness of the program and the test of the survival effect.

– The father population of the study consists of (40) children from those who are attending one of special education communities. We identified (9) children as a core (main) sample. We selected (4) children as a therapeutic sample( experimental )from those who received the lowest scores on a diagnosis scale of autism and the highest scores on a diagnosis scale of self-injury to apply the proposed( suggested) program of the study in them and their ages are between ( 8-10 ) years.

– We prepared the proposed (suggested program of the study using behavior modification techniques to reduce the target behavior modification (self-injury) and increase alternative behaviors. The training program included 30 therapeutic sessions. All these sessions were made in 10 weeks by 3 sessions a week and the time of the implementation (application) of the sessions ranged between 20-35 minutes.

– There were no statistically significant differences at the level of significance between the scores of the individuals in the experimental group and the iterative dimensional two measurements on the scale of self -injury, which means I have a progressive improvement in the group until the experimental follow-up period. The size effect of the sub-dimensional and total score for the scale is large and this confirms the effectiveness of the proposed (suggested) program to reduce self-injury behavior in children with autism disorder of the sample of the study.